Glenrowan lies to the South-west of Wangaratta and stands as the most famous part of ‘bushranger’ history in Australia. Glenrowan is the site of the final siege and capture of the Kelly Gang in 1880. These days the story of Ned Kelly and the times are preserved in an array of wonderful attractions and historic walks.

Historic Sites and The Kelly Walk 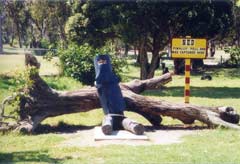 Pamphlets outlining a walk which takes in the townsites associated with the Glenrowan siege can be obtained in the town. The railway station has changed little since Ned lay wounded in the stationmaster’s office. Crowds used the station as a grandstand to watch the siege.

Kellyland is the main attraction in Glenrowan. There are four different sets, which relate different moments of the story — the waiting room of Glenrowan railway station, the shoot-out, the burning hotel and the execution at Melbourne Gaol. Visitors sit within these settings like first-hand participants. Original props include the bar of McDonell’s Tavern, an authentic hand-gun owned by Ned, Sgt Kennedy’s hitching post and a rare surviving copy of the findings of the Royal Commission into the Kelly manhunt. The show lasts about 40 minutes and it commences every half-hour from 9.30 am to 4.30 pm every day. 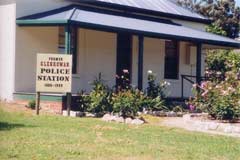 On the opposite corner is Kate’s Cottage, named after Ned’s mother. It is a gift and souvenir shop focusing on Kelly memorabilia and Australiana. At the back of the shop is the Ned Kelly Memorial Museum with illustrative displays. Outside are a stringybark replica of the Kelly homestead fashioned in the traditional manner with broadaxe and adze and decorated with the type of furnishings which one may have expected to see in the original which was allegedly erected by Ned (the ruins of the 1877 homestead can still be seen to the south-west of town, near Greta West). There is also a coach, a blacksmith’s shed, barbecue facilities and talking cockatoos. It is open daily from 9.00 am to 5.30 pm, tel: (03) 5766 2448.

The Cobb & Co is another museum. It features photographs, memorabilia and write-ups relating to the Kelly siege and shoot-out. The display is well laid out and housed in an authentic reconstruction of the town’s original Cobb & Co changing station, tel: (03) 5766 2409. It is open from 9.00 am to 5.30 pm daily.